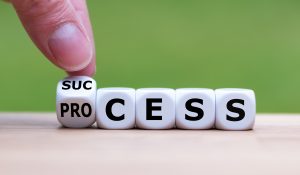 The default mode for law firms consists of custom-made work, done manually by one or more attorneys, in response to a one-off request. That’s been true for decades — and it remains true as law firms deploy recent law graduates at hundreds per hour to do low-level grunt work in aid of more highly compensated law partners.

Meanwhile, given intense legal and regulatory demands, corporate law functions struggle to bridge the gap between the resources they have and the ones they need. Absent an unlimited Legal budget, simply assigning more lawyers is not sustainable.

Rachael Pikulski of Bloomberg Law reported in July that, despite the break-through solution they present to corporate law departments,  alternative legal services providers (ALSPs) are “being used for a relatively small proportion of an organization’s workflow, despite the specialized services and cost-saving potential ALSPs offer.”

Indeed, ALSPs’ percentage of total legal spending is reported to be in the low to mid single digits. And, according to one source, it may have been as low as 3% in 2020.

For corporate law departments, this is a major missed opportunity.

Renowned law practice consultant Bruce MacEwan underlined this point in commenting on a 2020 Altman Weil report. The Altman report stated that corporate general counsel found that using ALSPs was the most effective tactic they possessed for reducing outside counsel costs. Yet, though 94.7% of them opined that this was the most effective tactic available to them, only 8.8% said they were actually using it.

Mr. MacEwan’s response*: “This is a market failure.”

“Our data shows 3, 4, 5, as much as 7 times multiple in what it costs to get a law firm to do something versus an ALSP.”

* Comments of Bruce MacEwan as a panelist in “Fighting Back Inflation: Legal Spend Management Tools To Navigate an Uncertain Economy”, Buying Legal Council, September 22, 2022. I was given a recording by the sponsor, and retain it in my files.