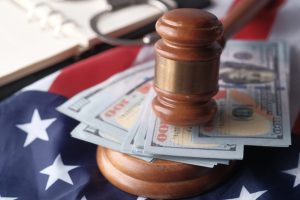 So writes Patrick J. Lamb, a distinguished corporate trial lawyer, who, along with another prominent trial attorney, Nicole Auerbach, founded Valorem Law Group in 2008, now ElevateNext Law. Their innovation: Ditch the billable hour, and bring alternative fee arrangements to the mainstream, as they defend in court companies that have been sued.

Here’s how Mr. Lamb puts it:

“Spend a minute and ask yourself why you don’t outsource problem solving for your own problems. Have you ever thought about going up to a random stranger and asking her to solve a dispute you are having with another person?  Would you feel better about crowd-sourcing the solution, asking, say, 12 people to come to a consensus about how to solve your personal dispute?

” … Most are likely to agree that the random stranger and crowd-sourcing solutions are not wise approaches to dispute resolution.  Yet that is exactly how many business disputes are solved. Except the random stranger wears a black robe, is referred to as ‘Your Honor’, and the crowd is called a jury.”

10 years into my legal career, I accepted a corporate client’s invite to run one of its divisions as a general manager — not as a practicing lawyer — reporting to a senior officer. One day that senior officer returned from jury duty and remarked to a few of us about ridiculous, borderline brainless, conversations he had heard in the jurors’ waiting room. A couple of days later, displeased with some other company’s action, he said he wanted to sue them. In more colorful language than Mr. Lamb used in his article, I told my boss that the 12 random strangers such a lawsuit would recruit for a jury were likely to be just like those unimpressive folks he had found so shockingly stupid while on jury duty. He backed off.

Not that I should have judged him (no pun). I had to go through my own maturing process. From an attorney whose professional blinders beguiled me into seeing lawsuits as noble and forceful action on behalf of clients (and, not incidentally, as lucrative for the lawyers). To an executive who could see litigation for what it really is: usually a colossal waste of company funds.

“Every B2B lawsuit represents a decision to outsource the solution to a business problem … This is the biggest lesson from 39 years in the trenches. Please, put me out of business.”