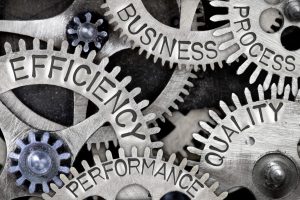 Legal journalists like to say that in-house counsel are much better positioned than outside lawyers to adopt labor-saving and accuracy-enhancing workflow processes, and the technology to support them, since they don’t have to maximize hours billed.

Despite what one might expect, Thomson Reuters’ “State of the UK Legal Market 2022“, issued this month, demonstrates that in-house counsel are laggards in using the systems and software that can save lawyers’ time and catch their mistakes.

“A sobering chart—starkly illustrates that in-housers are from same tribe that favors activity over optimization. Especially frightening when realizing that in-housers don’t bill hours—many still just work that way.”

“Thomson Reuters has found legal tech adoption among many clients [by ‘clients’, legal industry journalism means in-house counsel in corporate legal departments], remains at the very early stages. For example, only 18% were using a contract management solution. However, the flip-side of this is that there is a massive opportunity for growth … (got to look for to look for the silver linings, right … ?) …

” … If use is very low then there are good reasons for it … well maybe not ‘good’ reasons, but barriers that will need a lot of navigating ….”

Ivy B. Grey, legal tech entrepreneur, lawyer, and currently vice president of a legal tech firm, wrote this about the Thomson Reuters findings:

“At the ABA TechShow last month, I said that I’d lost faith in-house lawyers being a major source of innovation and change. People were shocked. I think they care about legal spend, but the rest? Nope. As long as it looks like what they were doing before, then it’s fine to them …”

“When I examine my own thinking on this, I think it was distorted years ago by the legal trade press giving a handful of innovative general counsels a lot of press. They were outliers.”

And finally, from Professor Bill Henderson, one of two or three leading scholars of the practice of law on behalf of business clients:

“In-house lawyers have been socialized and filtered in such a way that makes it extremely unlikely that they will think and act like process engineers. Changing that requires a lot of resources and rare, unflinching leadership … Someone like @CarrNext [Jeff Carr referenced above] is the missing link.”

Most U.S. corporate law departments face substantial demands to do more work with fewer resources. From EY’s most recent survey on the subject:

“Workloads are increasing faster than budgets and law departments are planning even more ambitious cost reductions. General Counsel expect workloads to increase by 25% over the next three years, yet 75% don’t expect budgets to keep pace. At the same time, many law department leaders are planning significant cost reductions that will require major operational changes.”

In this setting, law departments’ lackadaisical approach to efficiency — reflected in glacial-rate acceptance of processes and technology to that end — is not sustainable. This invites compliance misses, overruns in the legal budget, or some combination of the two.