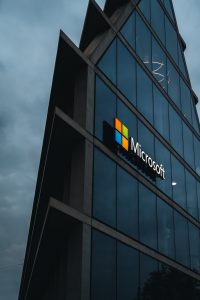 Three years after my posts describing Jason Barnwell‘s personal journey from MIT-trained enterprise software engineer to Assistant General Counsel of Microsoft (in three parts: here, here, and here), he gave the keynote (begins at 9:30 and ends at 40:20) January 13 at the Strategic Knowledge & Innovation Summit (SKILLS).

Barnwell, now General Manager for Digital Transformation of Corporate, External, and Legal Affairs at Microsoft, described how he got to Microsoft’s legal department from a large Silicon Valley law firm .

In his keynote, Barnwell recounted the experience that prompted him to leave the large law firm:

“A good engineer is a lazy engineer, which means that you don’t want waste. You don’t want to do extraneous work that doesn’t deliver value. And my experience in the law firm was not that.”

He described an epiphany about law firm waste:

“This was not going to work for me … I needed to go to a place where building something new that creates efficiency [will be rewarded].” And “if productivity was being measured as hours worked, that was not a game I was ever going to win.”

Hence his move from the law firm to Microsoft’s legal department.

Barnwell ended his remarks reflecting upon the current corporate environment of “exponential growth” in legal demands on business enterprises; where law firms, as he described them, are designed for merely “stable” capacity growth.

“There will always be a slice at the top that is premium work, and it’s always going to make sense to go to the law firms for that.

“Over time, we’re going to keep making that slice of our [Microsoft’s] pie smaller and smaller. So if law firms want to get more of our work, they’re going to have to move into other delivery models. Because success for me is not getting limousine service for every task and need that Microsoft has. That just doesn’t make sense, especially for our commodity and ‘run’ [ordinary operations] work.

“The framing that I would start putting around how I deliver services that are outside of that top slice [of premium legal matters] is: How do I turn that into something that is more of a product — that can really scale, that can be very efficient, that doesn’t necessarily insert humans in the middle of [the legal service delivery].”